This tutorial shows how to easily gain access to native (iOS and Android) APIs in your Shoutem extension. Most of the time when creating extensions, you’ll only use React Native writing in JavaScript. However, you can access any API of the underlying platform or a 3rd party native module.

As an example, we’ll show you how we’ve built a Shopify extension using their Mobile Buy SDK for iOS and Android. Although this is an advanced use case, as you follow the tutorial, you’ll notice just how easy it was.

Before we start, you might want to read the excellent official guides on how to write native modules for iOS and Android, since this tutorial relies on these concepts. Make sure you’ve read Getting started with Shoutem extensions too.

There are 3 cases for accessing native APIs from your extension:

Shopify lets you create and manage an online store. Merchants all over the world use it to grow their business, and many of them want to have their stores accessible from mobile apps. Shopify’s Mobile Buy SDK for iOS and Android helps developers integrate a store into an app.

Shoutem’s Shopify extension lets customers browse and buy products through a mobile app built with Shoutem. All that a store owner needs to do is enter his API key in extension settings.

The result of this tutorial is a Shopify store within an app built with Shoutem: 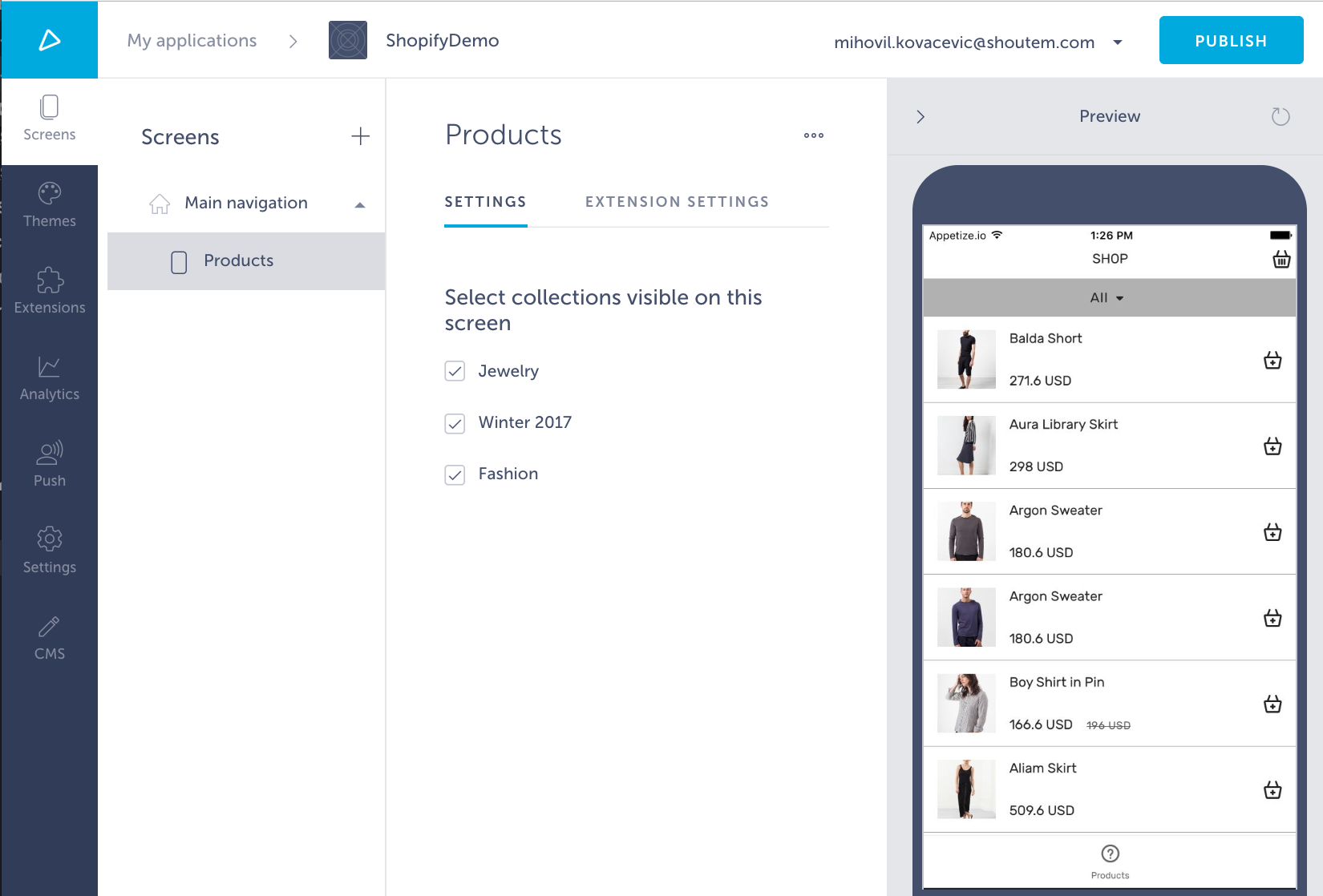 We won’t go into the detail of managing the store’s logic.

Latter is recommended as it keeps your extension focused on consuming the SDK’s API, separates responsibilities and lets other developers use your bridge in their projects.

Creating a bridge is time-consuming and error-prone process, but there is a great tool that helps you use JavaScript with native code.

Use CocoaPods the dependency management system for iOS, to install Mobile Buy SDK for iOS. iOS application will install the native dependency Pod in their ios/Pods folder. To have your bridge see this native code, set its Header Search Paths in Build Settings of your bridge’s .xcodeproj. To reference the application’s Pods folder from the bridge’s ios folder, reference the current directory with the $SRCROOT variable in XCode, and then refer to the application’s Pods folder. The result should look like this:

Set this path for both the Debug and Release builds, and mark it as recursive. The following picture shows how this setting looks like for the Shopify bridge when viewed in XCode: 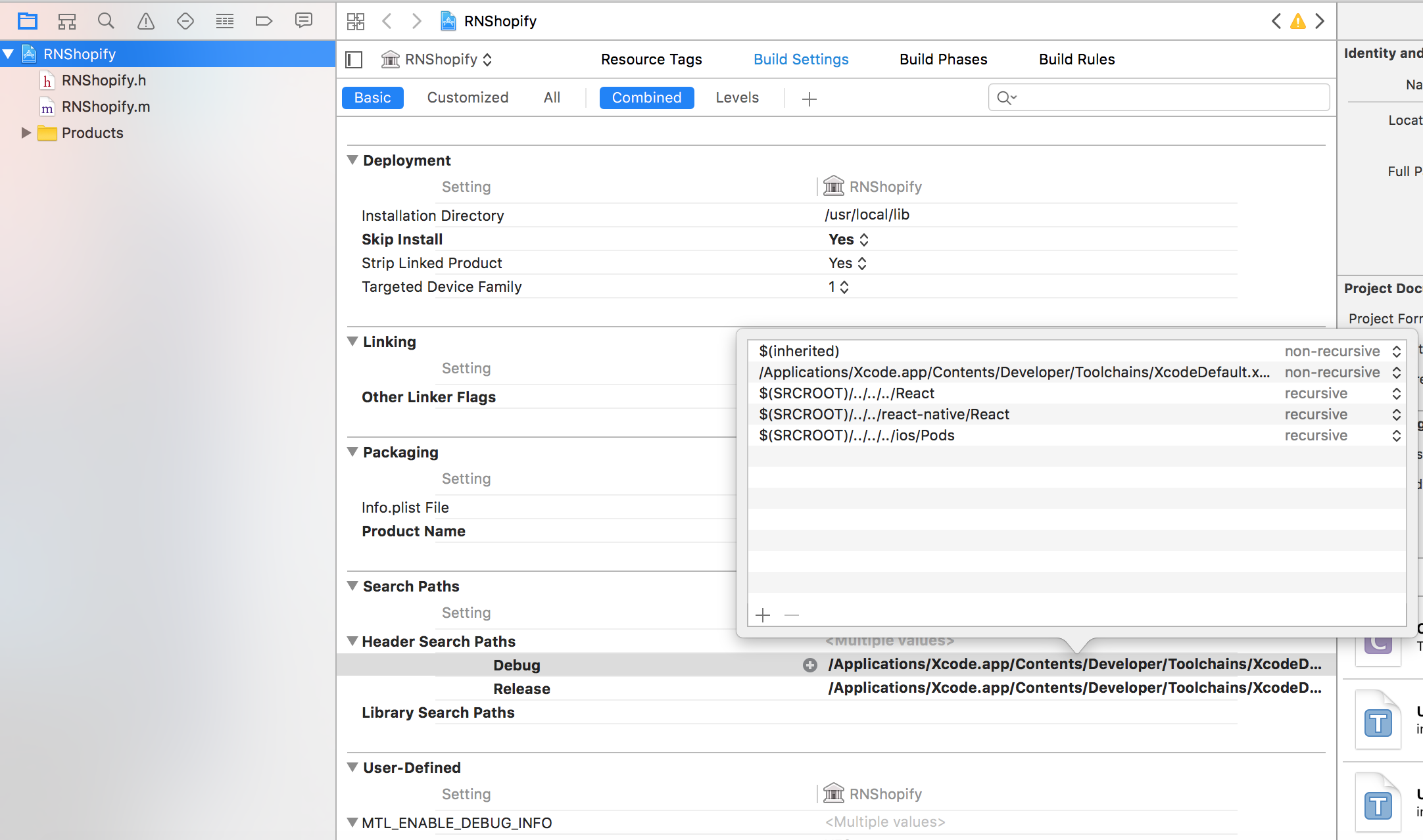 Including the bridge in our Shopify extension

There are 3 steps you need to take before using the bridge in your extension.

First, add it as a dependency to your extension’s package.json, in the app folder.

Then, link all the bridge’s native code to the end package.json. With Shoutem, you do this by using an rnpm postlink command in package.json. Invoke the react-native link command for every native dependency. Shoutem’s build process will execute it after it installs all dependencies for all extensions.

This is how our Shopify extension’s package.json looks like after these two steps:

You can only execute a single command with rnpm postlink. For linking more than one native library, use an execution script, as shown below:

Shoutem installs extensions as node modules. This is why you need to prepend node_modules/{extension name} to the script path.

The Shopify extension uses a React Native library react-native-search-bar that wraps the iOS native search bar. Since there are two libraries we need to link, we wrote the following run script, which you can change and reuse in your extension:

We used Node’s synchronous API because the asynchronous version causes the build to hang forever in some situations.

The last step is to include the SDKs from Shopify, which do the heavy lifting on the native side.

The best practice when creating wrappers around native libraries is to let the application itself manage the dependencies. Shoutem extension is a module within a larger Shoutem application which is responsible for dependency management.

On Android, things are straightforward because you specify native dependencies in build.gradle and install them as part of the build process. Native modules for iOS need an extra step but Shoutem makes this easy.

Shoutem treats an extension’s iOS aspect as a Pod and lets it specify a .podspec file where it can declare its dependencies. At a build time, Shoutem application dynamically includes all native iOS dependencies declared by its extensions in one Podfile.

The example below shows how the Shopify extension declares its Mobile Buy SDK dependency:

This is how will the Shoutem application Podfile look like after the build process:

After you build the application, a native dependency will be available to any bridge that wraps it and thus to JavaScript code.

Calling the SDK’s methods from JavaScript

Once you have your bridge and its native dependencies installed, you can use it as any other JavaScript module. Let’s use Shopify’s SDK to fetch shop information and use it in our extension:

Requiring user permissions and other advanced use cases

As mentioned in the introduction, sometimes you’ll need to support advanced use cases and change core project files. This can mean changing the application’s xcode.project or build.gradle files, AndroidManifest.xml, or even AppDelegate and MainActivity. With the help of Node’s filesystem modules and 3rd party libraries such as xcode, you can do just about anything.

We’re working on a more developer friendly system for common use cases, which we’ll describe in detail. For now, with some Node scripting, you can meet any goal in your custom extension, although with some extra effort.